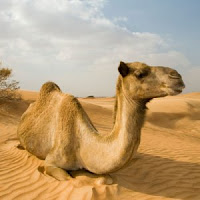 As miracle of Islam, Al-Qur'an has many privileges inside. There are many real stories-mentioned, and many basic science as a guide for people who want to think in Quran. The Qur'an also mentions the various animals and plants with a variety of privileges as a gift to mankind.

Allah has created all creatures with a variety of strengths and advantages either at sea or on land as a sign of power. Among the animals that have the privilege of gods mentioned in the Qur'an as a miracle of Quran is the camel.

One of the animals mentioned in the Holy Qur'an as a sign miracle of Quran is the camel. These animals have many advantages to serve human life.

Camels have a special body structure that makes it able to live in a harsh climate, hot temperature, and nature is barren. Camels as one miracle of Quran can live for days without eating and drinking. He was also able to bear the burden of hundreds of pounds for long distance on the body. Of course, camel privilege mentioned in the Quran only to serve man so that he always remember the power of God As with its creator.

Among the features body structures that are owned camels are:

The soles of the feet that are suitable for a variety of conditions including sand chisel,Eyelashes that can be automatically closed during sand storms,Nose and ear hairs are so long that they can prevent the entry of dust,Her knees were covered with calluses, formed of hard and thick skin to protect it from horn wounds of the land surface is very hot,The thick body hair to protect it from cold and hot temperatures,Hump As with the fat containing food reserves in a long time, and others

These animals can survive without food and water for eight days at a temperature of 50 C, while humans will be dying or even die without food and drink for this. Besides, camels are able to consume up to 30 liters of water, which is about a third of their weight, as a backup for dry weather in the difficult nature of water.

Allah said in Quran Sura Yunus Ayah 6 : "Verily, in the alternation of the night and the day and in all that Allah has created in the heavens and the earth are Ayat (proofs, evidences, verses, lessons, signs, revelations, etc.) for those people who keep their duty to Allah, and fear Him much.

Camels are mentioned in the Holy Qur'an with various privileges and advantages that only a small part of the miracle of Islam As with proof of the power of God to man to obey him, running all the orders and avoid any restriction.