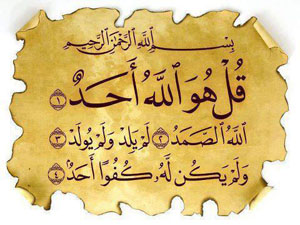 Bismillaah ar-Rahman ar-Raheem
Surah Ikhlas - Qul huwallaahu ahad Allahus samad Lam yalid wa lam yuulad Wa lamyakun lahuuu kufuwan ahad
In the name of Allah, the Beneficent, the Merciful.
Say: He is Allah, the One. He is Allah, the Eternal, Who was never born, nor ever gave birth. The One beyond compare.

Know that increasing recitation of Surah Ikhlas is a means of attaining the love of Allah and when Allah loves you he makes Jannah fard upon you or and makes you one of his saints. As whomever Loves Surah Ikhlas, Allah loves them. There is a Hadith were a Sahabah that kept on reciting Surah Iklas in every ra'kah due to his love of it and the Holy Prophet (s) asked the man why he kept on reciting it in every rakah, he replied, 'because it contains the attributes of the most compassionate and i love reading it. The Holy Prophet (s) then said: 'informed him that Allah loves him.
Reciting Surah Ikhlas 1 time will get the reward equal to 10 times the number of people who have believed in the Islamic teachings.

Reciting Surah Ikhlas 1 time compared to one third of complete Quran Recitation. Reciting it once is a means of blessings for the reciter.

Reciting Surah Ikhlas 11 times the reciter will have palaces built for him in Jannah.
Reciting Surah Ikhlas 100 times, all his sins for the past 25 years are forgiven(minor sins), constant recitation of this Surah will help keep the heart sincere inshallah, and Allah will also increase ur Rizq, to gain abundant wealth inshAllah. (except the sins of killing an innocent person or usurping the property of people).

Recite Ikhlas 100 Times and Enter Paradise to Your Right.
Anas (R) has reported the saying of Rasulallah(S) that, "If anyone who is about to sleep on his bed lies on his right side, then recited Al-Ikhlas 100 times, Allah will say to him on the Day of the resurrection, 'My slave, enter Paradise to your right side.'" (Tirmidhi)

Reciting Surah Ikhlas recited 200 times daily gets forgiveness of 50 years of sins-(minor); but, if he has to pay loan to anyone,that will not be forgiven." and Allah will grant him 1500 Rewards (At-Tirmidhi and Darami)

Surah Ikhlas and 'The kings of mankind'
On the authority of Abu Hurairah (may Allah be pleased with) The Prophet (s) said “on the day of resurrection Allah will grasp the entire earth by His Hand and shall roll up the heaven with His right Hand and say “I am the king, where are the kings of the Earth?” (Sahih Al Bukhari) This hadith refers to the ayah in Surah Ikhlas which is: “The king of mankind”.

Time frame to read 100 times Surah Ikhlas about 4/5 minutes and 1,000 times Surah Ikhlas from 20/30mins to upto an hour depending on speeding thats me-(the author) others will need more time it depends on how you acustom yourself as beginners it can take up to an hour to recite 100 but someone whose is used to reciting and is fluent and after pratice and time will speed up.
Some notes about Surah Ikhlas and One Third of Quran

The meaning of one third of Quran, Allah has divided the Qur’an into three parts: “Say: he is Allah, the one and only” is one of these parts.

The meaning of this is that Allah sent the Qur’an in three parts:
A third of it is comprised of legal rulings,

A third is comprised of exhortations of promises and warnings,

"Allah's Hadra are three. His Essence, His Actions, and Attributes. This Surah is the only Surah of Quran that is exclusive to Allah's Essence. and this is why it is considered 1/3 of the Quran"- from Shaykh al Islam Ibrahim Niasse

Tajalli-(manifestation), which has almost the same meaning as showing itself, display, and appearance, in the language of Sufism means being favored with God's special gifts. It also denotes that the Divine mysteries have become apparent in the heart of the seeker by means of the light of knowledge of God Almighty. Every traveler to the Truth can feel this favor in the conscience according to capacity and station.

Surah Al-Ikhlas is 112th chapter of the Qur’an, and is said to be one of the earliest revelations that the Holy Prophet Muhammad received from archangel Gabriel.

The Arabic root of the word ikhlas is kh-l-s which means to be purified or refined. The very concept of refining and purifying signifies the burning away of all impurities, leaving nothing but the very essence of that which was sought, which, in this case, is Allah.

Such a purification is the burning away of all of the worldly misunderstandings, concerns and desires that separate us from the One; the One and Only upon whom we depend, the One and Only who is our foundation rock, the Eternal One and Only.

People have issues with learning Sunni Aqidah-belief, simply have to read Surah Ikhlas.

So what is our Aqidah-belief and what is the brenchmark, as to what we can say or what we shouldn't say or believe about Allah is all in Surah Ikhlas; meaning that 'He is Allah, the Eternal, Who was never born, nor ever gave birth. The One beyond compare', and the last part is what we need to remember, 'The One beyond compare', meaning whatever you try to compare him to, that isn't him simply. And this stops all silly arguments about were is Allah, can Allah lie or not and other silly questions and confusions, Surah lkhas stops all confusions about Allah, with 'The One beyond compare'. So the brenchmark is Allah is 'beyond compare' and that is who Allah is, '..the Eternal, Who was never born, nor ever gave birth.'

Al-Ahad indicates the singularity of existence that cannot be shared by another entity.

Al-Samad implies all attributes of perfection. It means: “the One whose dignity and sovereignty reaches the extent where all other things in existence depend on for all their needs.” In other words, all needs are brought before Him. This attribute cannot be for other than the One who truly possesses complete perfection in al qualities. This cannot apply to anyone other than Allah. He is al-Ahad and al-Samad. And He 'Who was never born, nor ever gave birth.'The One beyond compare'.

This explanation makes clear that these two names possess a comprehensiveness in their indication of Allah and His attributes that are not found in any other names. And these names are not mentioned in any other chapter of the Qur’an. This shows the special value of this chapter, and why it is regarded as a third of the Qur’an.
by Muhammad Sajad Ali
islam2jannat@yahoo.co.uk
0753-5654-125 UK
Some Notes:

The Prophet (peace and blessings of Allaah be upon him) said: “Whoever recites Qul huwa Allaahu ahad ten times, Allaah will build for him a house in Paradise.” (Sahih al-Jami’ al-Saghir, 6472).
The Holy Prophet (s) once advised a poor person to always say ‘salaam’ when entering his house, even if there was nobody there, and then Recitie Surah Ikhlas. After a little while, the man became abundantly wealthy.

"whoever reads Surah Ikhlas when he enters his house, poverty will be eradicated from the family of that household and neighbours."

It is makruh to recite this surah in one breath. This surah has numerous other benefits and is a cure for many ailments. It should be recited when travelling or when facing a tyrant ruler.

Reciting Surah Ikhlas 10 times at the end of every Fard-compulsory prayer will enter paradise from any of its Gates. "whoever accomplishes three things with a sound iman will enter paradise from any of its Gates, and will be married to the pure wives of his choice. He who forgives a murderer of kin; he who settles debts on another person secretly; and he who recites 10 times after every Fard-compulsory prayer Surah Ikhlas." Abu Bakr said: "or even doing any of these, O Messenger of Allah?" the Holy Prophet (s) then said: "or one of them."
Some Surah Ikhlas patterns and Designs 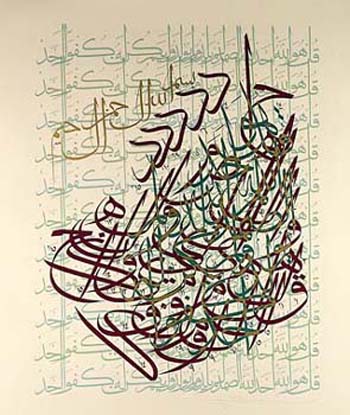 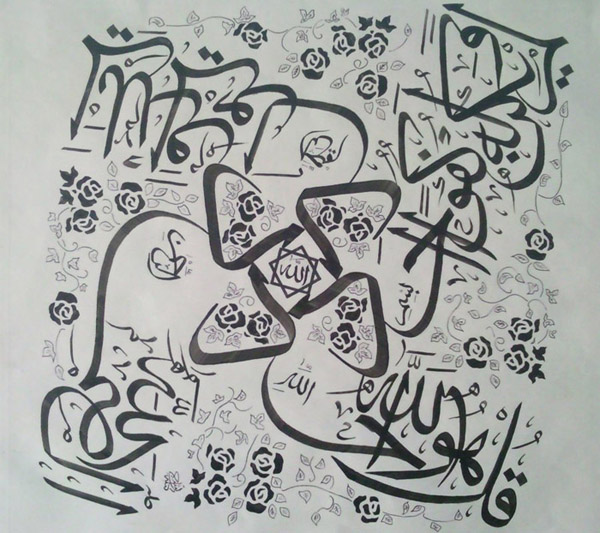 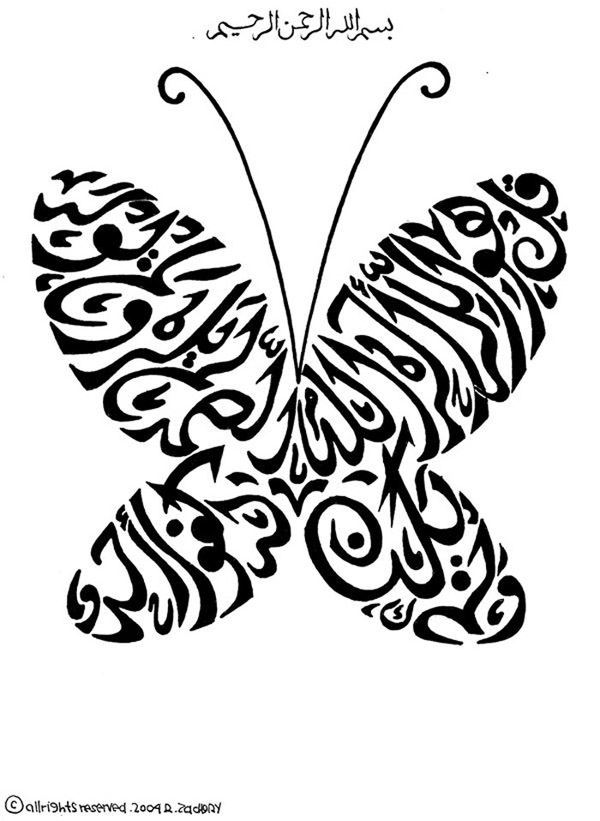 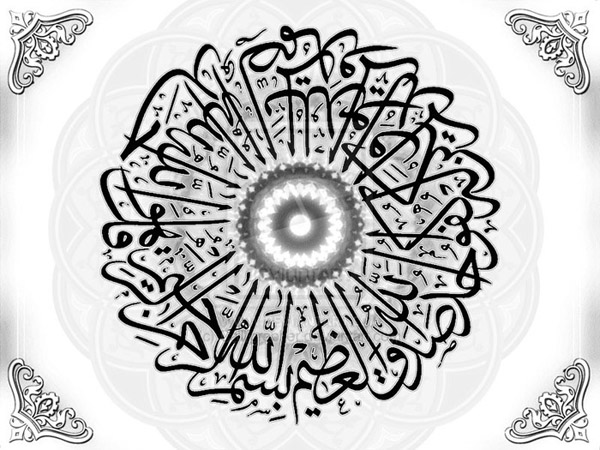 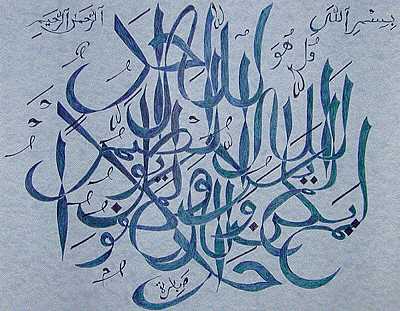