According to the study, based on data from 232 countries and territories, Asia is home to nearly 20 percent of the global Muslim population.
Nearly one in four people worldwide is Muslim — and they are not necessarily where you might think, according to an extensive new study that aims to map the global Muslim population.
India, a majority-Hindu country, has more Muslims than any country except for Indonesia and Pakistan, and more than twice as many as Egypt.
China has more Muslims than Syria.
Germany has more Muslims than Lebanon.
And Russia has more Muslims than Jordan and Libya put together.
Nearly two out of three of the world’s Muslims are in Asia, stretching from Turkey to Indonesia.
The Middle East and north Africa, which together are home to about one in five of the world’s Muslims, trail a very distant second.
There are about 1.57 billion Muslims in the world, according to the report, “Mapping the Global Muslim Population,” by THE PEW FORUM on Religion & Public Life. That represents about 23 percent of the total global population of 6.8 billion.

CNN Report says: Nearly one in four people worldwide is Muslim -- and they are not necessarily where you might think, according to an extensive new study that aims to map the global Muslim population. CNN Story page says Islam winning converts in Western world The second-largest religion in the world after Christianity, Islam is also the fastest-growing religion. In the United States, for example, nearly 80 percent of the more than 1,200 mosques have been built in the past 12 years
TIMES ONLINE Says : Muslim population 'rising 10 times faster than rest of society'
Indonesia is the world’s most populated Muslim country with 203 million Muslims, about 13 percent of the world’s Muslim population.
Pakistan has 174 million Muslims, India 161 million, Bangladesh 145 million, Iran 74 million and Turkey 74 million, according to the study.
“Together these six countries are home to about 85% of Asia's Muslim population and more than half (53%) of the global Muslim population.”
Nearly half of Asia’s Muslims are concentrated in South Asia.
“The remainder are somewhat equally divided between Southeast-East Asia (26%) and Central-Western Asia (24%),” says the study.
It found that the Middle East and North Africa have 315 million Muslims, about 20 percent of the world’s Muslims.
“The Middle East-North Africa region has the highest percentage of Muslim-majority countries.”
The study also finds that there are 240 million Muslims in sub-Saharan Africa, making up about 15 percent of the global Muslim population.
One-third of them live in Nigeria, which has about 74 million Muslims, about half of its population.
The region is home to countries with very large Muslim majorities, including Mauritania (99%), Niger (99%), Somalia (99%), Mayotte (98%), Comoros (98%), Djibouti (97%), Senegal (96%), Gambia (95%), Mali (93%), Guinea (84%) and Sierra Leone (71%).
Muslim Minorities 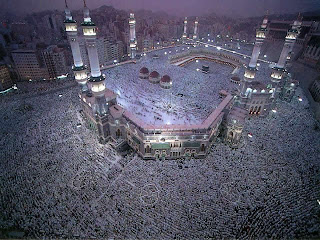