This is one of my old articles, but since it is Ramadhaan,, Alhamdulillaah, and most of us would be doing a lot of reading of the Qur'aan during this month, I thought it would be appropriate to send this article as a reminder to myself and everyone else.
May Allaah enable us to really understand the Qur'aan and apply it in our lives. Ameen.
The REAL recitation
By Asma bint Shameem 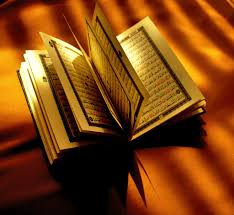 We read it for barakah.
We read it when our close ones die and when we move into a new house.
In fact some of us compete with others to see who can read quicker than everyone else and who can finish faster! Why, just this past Ramadhan, they read it 5 times over!

And yet….do we ever wonder why nothing in us has changed…..why our relationship with Allaah has not improved?


Why is it that our hearts are still unmoved……our lives still unaffected…. our souls still untouched?

But, wait a second….isn’t the Qur’aan  supposed to be a mercy and a healing for mankind?
It is. Allaah said so. And you know it.

Yet, in spite of reading the Qur’aan, we are still dealing with interest, we are still not wearing the hijaab, we are still at that same old gas station…..still selling that same old beer and lotto. We are still the same as we were a year ago…..or 5 years ago…or even ten years ago.
Ever wonder WHY……..?
Allaah says if He were to send down the Qur'aan upon a mountain, it wouldn’t be able to bear it and it would humble itself and crumble because of the fear of Allaah.
"Had We sent down this Qur'aan on a mountain, you would surely have seen it humbling itself and rending asunder out of fear of Allaah. Such are the parables that We put forward to mankind that they may reflect." [Surah al-Hashr:21]

I know many people who’ve read the Qur’aan many times, cover to cover. Yet they did not understand one single word they read!
Do you think that is the purpose of sending down the Qur’aan from above the seven heavens?


"(This is a) Book that We have sent down to you, full of blessings, so that they may ponder over its aayaat, and that those of understanding may remember." [Surah Saad:29]

Sure, I know the Prophet (Sal Allaahu Alaiyhi wa-Sallam) said that we will be rewarded for reading the Qur’aan, whether we understands it or not , but just reading it is not enough and, if you really think about it, of not much use to us, unless we understand it and implement it in our lives.
The Sahaabah  would not go beyond ten Aayaat until they had learnt them and understood the knowledge within them and implemented them in their lives.
And where are we compared to that??

When our kids are young, we lay SO much emphasis on them finishing the reading of the Qur’aan one time. When they are done, what do we do? We celebrate their ‘Ameen’ (their finishing the reading of the Qur’aan), but then what??
Where do we go from there?? Did we ask them to keep up with the reading??
Did we explain the meanings of this Glorious Book of Allaah to them??
Do they even know what it means??
And the real question is……
DO WE EVEN KNOW WHAT IT MEANS???

And then we wonder why there are so many problems in our lives…why our kids are not in our control….why there is no peace and barakah in our selves!!!!

“O mankind! There has come to you a good advice from your Lord (the Qur’aan), and a healing for that in your breasts, a guidance and a mercy for the believers.” (10:57)

And then there are the ‘Huffaadh’, people who have memorized the Book of Allaah by heart, so much so that they don’t miss a single word. Yet when you look at their lives, they are far, far away from the teachings of the very Book they have memorized!

Al-Hasan al-Basree says about such Huffaadh "... one of them says, ‘I recited the whole Qur'aan and did not miss out a single letter.’ and by Allaah, he missed out the whole of the Qur'aan! No Qur'aan is seen in his character or deeds! By Allaah, these are not reciters or scholars, they are not wise nor pious. Whenever the reciters are of this type, may Allaah not increase their like amongst the people!"

Subhaan Allaah!!!!
Unless we read the Qur’aan with understanding, pondering over its Aayaat, reflecting on its true message and putting it into practice, we are missing the real essence of the purpose of sending down this Magnificent Book.

"Do they not then contemplate on the Qur'aan, or are there locks upon their hearts?" [Surah Muhammad:24]

Remember, that the true servant of Allaah never ceases from reflecting on the Book of Allaah. And there, his heart bears witness to such glorious knowledge that it increase his eemaan and strengthens it. However, this increase of eemaan does not happen unless he concentrates on understanding the Qur'aan, applying it and acting by it, as many people who read the Qur'aan will find it to be their opponent on the Day of Judgment.
The Prophet (sal Allaahu Alaiyhi wa-Sallam) said:

"Verily, Allaah raises up a people with this Book and He abases others." [Muslim]
And he (Sal Allaahu Alaiyhi wa-Sallam) also said:
" the Qur’aan is either a proof for you or against you." [Muslim]

So read the Qur’aan with ease and tranquility, pondering over the words, reflecting on its meanings, and then apply it in your lives.


Don’t say to yourself….“When am I going to finish this Surah?”
Instead, ask yourself…..

“When will I start obeying the orders of Allaah contained in the Qur’aan?”
“When will I pay heed to the admonitions contained within what I just read?

The Qur’aan is not just for the Ulama. It is for everyone…..including you and me. If we are really serious about our meeting with Allaah, we need to ask ourselves these tough questions…..
Have we read and understood the Qur’aan at least once in our lifetime?
What is our age now?
Do we really know and understand the true message of this Holy Book that changed lives of so many in the past? Do we really…..???

"Has not the time come for the hearts of those who believe to be affected by Allaah's reminder (the Qur'aan) and of the Truth that has been revealed….." [al-Hadeed:16]